Can cats eat bell peppers? When I was asked this question for the first time, I was a little bit surprised. I mean, why would you feed your cat bell peppers? Later on, I figured it out. We eat bell peppers quite often and bell peppers are used in a wide variety of recipes. It’s very easy for your cat to get a chance to try it accidentally. Furthermore, I have discovered that some cats actually like bell peppers.

So, when it comes to cats there are always some new surprises. I would’ve never guessed that some cats might like bell peppers. Just think about it, bell peppers don’t have a strong taste or smell, they contain almost no fat and protein. Well, cats work in mysterious ways. But, let’s see what happens when cats are curious about bell peppers.

Bell Peppers Are Not Bad for Cats

Since cats usually get their paws on bell peppers by accident, don’t be afraid if it happens. Bell peppers are pretty safe for our feline companions. Of course, if they eat a small amount. So, the short answer to our question is: yes, cats can eat some bell peppers. They are not toxic to cats. Moreover, they aren’t harmful in any way if your Fluffy eats small amounts. Which brings us to another question – is it healthy?

They Are Healthy for Humans

Bell peppers are pretty healthy for humans. By the way, they are native to Central America and Christopher Columbus was the first one to bring it to Europe. They are rich in vitamin C. Actually, they contain more vitamin C than lemons, oranges, broccoli, cranberries, and many other fruits and veggies traditionally known as good sources of vitamin C. They also have moderate content of vitamin B6.

Of course, it’s rich in carbs and fibers like most veggies. Bell peppers contain a variety of other vitamins and minerals, but in pretty small amounts (read: insignificant). 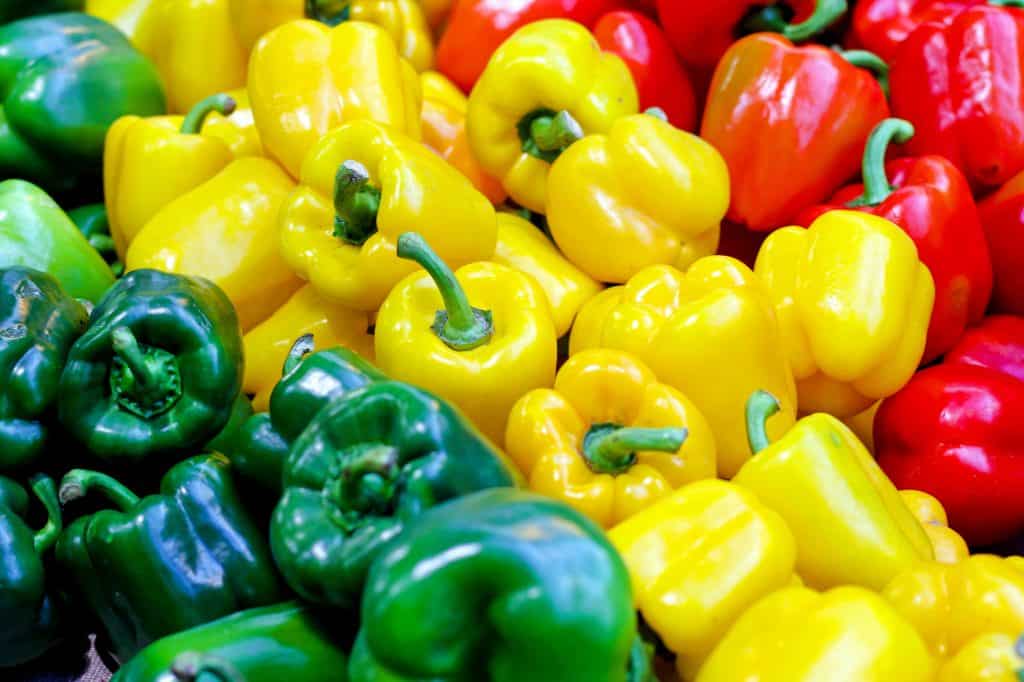 They Are Not So Healthy for Cats

Recently, I read a couple of articles that claimed that bell peppers are healthy for cats. All of these articles based their claims on the same things. Bell peppers are rich in vitamin C, fibers, and antioxidants. Oh, and red bell peppers contain vitamin A which is very important for cats’ health.

If you believe any of this, I have some breaking news for you! First of all, cats don’t need vitamin C because their liver produces it. So, your cat doesn’t need additional vitamin C unless it has a serious liver condition or some other illness. As for fibers, cats can benefit from a very small amount of it. Antioxidants are my ‘favorites’. While these chemicals do wonders in lab conditions, there are no proofs that they benefit humans let alone our cats. Apparently, antioxidants have a hard time reaching our bloodstream. And even when they do, most of them are eliminated before they can affect our cells in a positive way.

As for vitamin A, most veggies, red peppers included, don’t have it. They contain beta carotene, a pro-vitamin that transforms into vitamin A in our body. Unfortunately, cats can’t do it. They need another animal to transform the pro-vitamin, and when they eat another animal they get ready-made vitamin A. Great sources of vitamin A for cats are liver, fish liver oil, and egg yolk.

So, it is obvious that bell peppers are not so healthy for cats. Simply, bell peppers don’t contain anything that cats actually need in their diet. Cats need high-protein and low-carb formulas to thrive. This means that the largest portion of their meals must be meat. Yes, cats need minerals and vitamins as well. But, they are adapted to get them from animal sources and not from veggies and fruits.

Feeding your cat is not as simple as it looks. Cats have specific nutritional requirements to stay healthy and thrive. Generally, sharing your food with your cat is not a good idea. It comes with many risks and almost no potential benefits. So, if you want to make sure that your Fluffy eats healthy, choose cat food with high meat content. I prefer wet cat food formulas as they usually have a better fat to carbs ratio, and moisture makes it more like their natural food. But, premium dry formulas can be equally good.

You can also cook for your cat, but if you do, make sure you get the knowledge to make your cat’s diet balanced.

As for can cats eat bell peppers, it is the same story as with many veggies. Except for those that are toxic to cats like garlic and onions. Your feline companion can’t benefit from bell peppers. But, if you feed her or him with a couple of bites occasionally, it is okay. So, as a general rule of thumb avoid feeding your cat human food. And if you can’t help yourself, make sure you do it rarely, and in small amounts.

Check out our article on food you should not feed your cat.