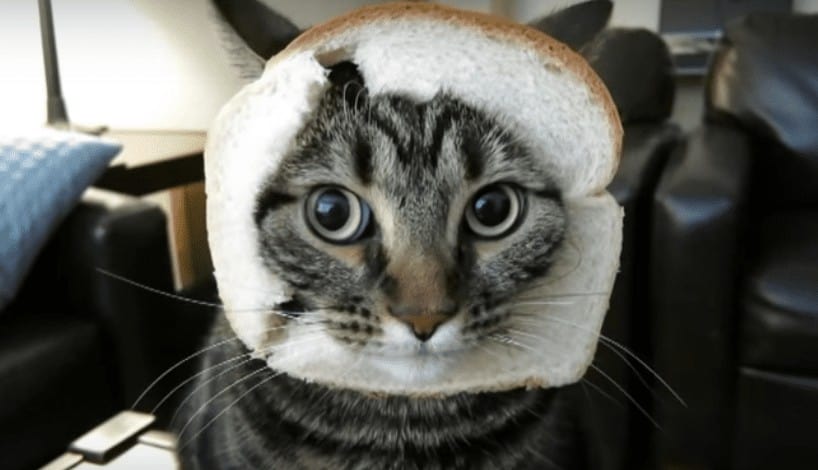 For us bread is one of the most common foods out there and they have been an essential part of the daily diet that we have since the early days of mankind. This doesn’t mean that if this is something we enjoy our pets should feel the same way. The question we want to answer today is: can cats eat bread and the answer is a bit more complicated than a simple yes or no.

In moderate quantities it is quite safe for cats as a treat because most of them really enjoy the taste but it is in no way essential for their diet. Offer them bread with the idea that it won’t have any health benefits for them so never consider it as a replacement for things like meat.

The flavor of yeast is really attractive to cats and thus it is used as a flavoring agent in many of the cat foods and treats as well as in some medications for cats. But bread has very little fat and that is one of the most important elements in their diet so only consider it as a treat.

Cats are primarily carnivores and you should never give them more than 10 to 15% of the daily caloric intake in the form of human food. Their stomach is sensitive to many things so pay attention to bread with raisins or garlic because these can be lethal.

Toasted bread follows the same rules as regular bread, it is generally safe for cats but you should never exaggerate with it. If you give your pet some of the leftover toast from your breakfast be careful since some of the toppings can be really dangerous. Among the ones you should avoid are the chocolate spreads, butter and peanut butter, and anything with cinnamon.

Also if the toast is really burnt (if you wouldn’t eat it) then you should throw it away since it is hazardous for you and your cat as well. The acrylamide compound that is formed through the burning of the bread can damage nerves and could even lead to cancer.

The bread dough is something that is always to be avoided. The purpose of that dough is to increase in size and if it is consumed before baking that will happen inside the cat’s stomach leading to extreme pain and if too much was ingested problems can come in the form of breathing difficulties as well. The yeast also has ferments that produce alcohol and you might get your pet disoriented, vomiting or even in a coma.

Some people like to bake their own bread but if you are one of them make sure that the bread dough is always covered and away from the reach of your cat. If your cat somehow managed to ingest a bit of the dough you shouldn’t wait to see any symptoms. Instead rush to the veterinary as soon as possible since it won’t take long for the cat to be in agony.

Cats can eat small amounts of bread but they don’t offer any nutritional value and bread dough can be really harmful so never feed it to your cat.