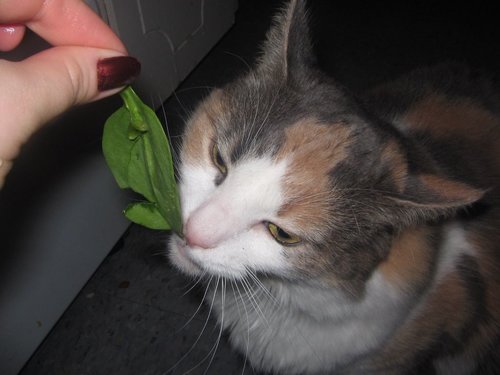 Popeye used it to increase his strength and, since it is very rich in iron along with other nutritious elements, it is really healthy for us humans. But can cats eat spinach? We know that vegetables aren’t really on their natural menu yet some of them aren’t doing any harm so is spinach one of those? Let us find out together!

It was first grown in Persia and then spread through Europe and in the rest of the world. Spinach is low in fat and filled with vitamin K, A, C, B and E. There are many minerals in it such as the already mentioned iron, magnesium, manganese, calcium and potassium and is very rich in antioxidants so it is one of the healthiest vegetables for us.

Spinach lowers blood pressure, reduces inflammation, lowers the symptoms of diabetes and the risk of asthma and cancer. Some of these benefits can be received by cats as well and spinach also helps regulate their stool, improve their immune system and reduce their body fat. The digestive system of cats though is made for meat and thus cats should eat that as their main meal, but some things on the side won’t do too much harm.

There are oxalates in spinach and they increase the risk of getting bladder stones in the urinary tract of your cat so if you know that your pet suffers from some urinary or kidney problems then you should definitely avoid this vegetable since it might do a lot of harm. The cats with a stomach that can get irritated easily should also avoid this plant since it can lead to allergic reactions like vomiting or diarrhea.

The oxalic acid in spinach can lead to deficiencies in calcium and iron levels if consumed on a regular basis so only use it occasionally and start with a very small quantity to make sure your cat tolerates it. There are many cats who will show no interest in a plant like this so if this is the case you shouldn’t force them to eat spinach by sneaking it into their normal meal. This will just increase the risk of stomach problems.

Overfeeding your cat with vegetables will probably lead to stomach problems since their digestive system isn’t as adapted as ours is to assimilating this type of food. Even making it a daily treat is a bad idea since it increases the chance of having urinary and kidney problems so just add a properly washed leaf from time to time.

Due to the high levels of calcium oxalate there are other vegetables that can increase the vitamin levels of your cats and you should use those instead if you are really keen on adding veggies into the cat’s diet. Among the best choices are lettuce, broccoli or peas so give those a try!

Yes, but it isn’t recommended. If they do eat some they should do so in moderation since this can lead to kidney problems.