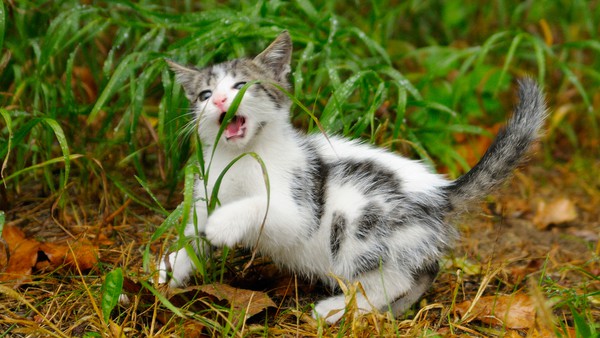 Cats like to explore and thus should ideally spend as much time as they can outdoors but this also brings some new threats you have to worry about. You might have noticed your cat nabbing on some blade of grass and thus wonder if that is safe for your pet. Can cats eat grass? Is this safe and what is the reason cats do this? Let us find out together!

It is obvious that as the cats are obligate carnivores they don’t require grass into their diet but they don’t do this for the nutritional value. It is very difficult for them to digest it as they lack the enzymes required to assimilate fibers and you will probably notice that they throw up after a few bites of grass.

Containing some fibers that are indigestible, some trace minerals and the vitamins A and D, grass doesn’t actually offer any nutritional benefits for cats since their stomach isn’t able to dissolve this kind of plant. They might though feel the need for some of the nutrients contained in the grass and thus the choose to nibble on some leaves when they get the chance.

Grass can aid in the digestive process of a cat as it induces the regurgitation of undigested elements. In the wild they might eat something like a mouse and they will have difficulty to separate the fur or bones from the meat so grass helps them vomit the parts they cannot assimilate and this reduces the risk of having punctured or blocked intestines.

Hopefully, you probably aren’t feeding mice to your cat and thus this isn’t a problem for them. So as the cats that stay mostly indoors don’t seem to have such a reason to eat grass why do they still do it? Another quite frequent reason is to get rid of their own excess of fur that might get stuck in their stomach from the grooming that cats like to do.

Hair cannot be digested and they have to remove the hairballs before they completely block the digestive tract so this is a much healthier alternative for the cat when compared with the pains of intestinal blockage.

Some cat owners might get frustrated by the dramatic display that comes when a cat vomits and thus they will probably try to stop the pet from doing this. As you probably realize by now, this is quite a big mistake as this habit can decrease the risk of more serious problem. You can actually find grass pots in many pet stores so that the cats can have this within their reach indoors too and this way you don’t have to worry about pesticides or other highly dangerous chemicals.

This is quite natural and it is recommended to allow your cat to do this if they seem inclined to.