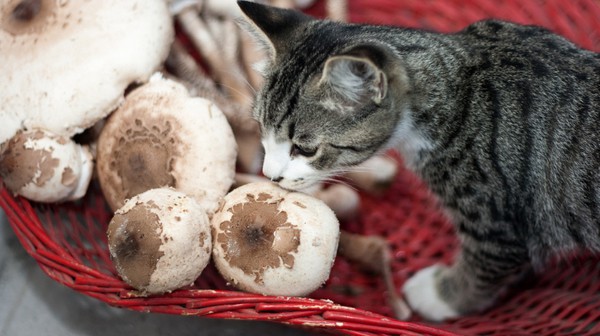 Vegetarians consider them to be an alternative to meat so if you you aren’t fond of animal products you might ask yourself if your cat can follow a similar route. We use mushrooms in pizzas, omelets, pastas, stews or soups and they are quite healthy for us but can cats eat mushrooms? Let us find out!

They have a small amount of proteins but meat is a much better source for those than mushrooms for cats since their digestive system is adapted for that type of food. They can improve the liver and kidney functions of a cat in small quantities and as they have a lot of antioxidants they can also prevent cancer.

The low level of fat means that they could help with a cat’s weight problems but you should never offer too many mushrooms at once. The studies done on the way a cat’s body reacts to mushrooms are still very lacking so you might want to check with your vet before adding any to a cat’s diet, especially one that has digestive problems.

It is obvious that mushrooms you wouldn’t eat shouldn’t be given to a cat either. Even from the ones that we do buy for ourselves not all are as good for cats as you might think. One fact is that cats are really attracted by the taste and texture of mushrooms, finding them really savory which doesn’t necessarily mean that they are also healthy for them.

Cats can lead to an upset stomach, excessive gas, diarrhea and vomiting if they eat too many and this is the case with the ones that aren’t poisonous! If you want to offer your cat a bite of a mushroom then it probably won’t do them any harm but still you should be very careful.

Among the mushrooms that are known to be safe in small quantities are the Portobello ones, the shiitake and the button mushrooms. don’t feed them raw, cook them as you would if you would eat them yourself but don’t add any salt, fat or other spices that are harmful for cats.

There are various toxins contained in some mushrooms such as Amanitin, Muscarine, Isoxazole or Psylocybin and each of them can lead to severe problems of different sorts. If you know that your cat ate some mushrooms that you cannot identify it is important to rush to the veterinarian and also take a sample of the mushroom with you.

Always see a specialist if your cat shows symptoms like vomiting, diarrhea or lethargy. The usual treatment for poisoning involves inducing vomiting, administering activated charcoals to gather some of the toxins and IV fluids to help stabilize the cat’s condition. They might have to keep the cat for a while if the symptoms are life threatening so do your best to avoid such a situation.

It is not recommended to give cats mushrooms since they offer very few benefits and can lead to serious problems.