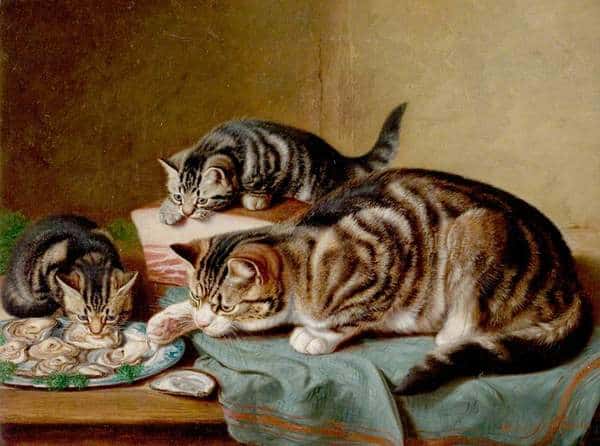 Oysters are extremely tasty but they also can pose some threat to us if they come from dubious sources as they are eaten raw most of the time. Since raw food is usually better for cats than the cooked version this shouldn’t be a problem but are there any other risks when it comes to these molluscs. Let us find out together the answer to the question: can cats eat oysters!

Oysters are a common name we give to several different families of salt-water bivalve molluscs and some of them even produce pearls. Only the ones from the Ostreidae family are actually edible and the most common varieties are the Belon oyster, the eastern oyster, the Olympia oyster, Pacific oyster and the Sydney rock oyster.

There is proof that oysters were consumed by humans since prehistoric times and while they are low in calories they are rich in proteins. They are a great source of zinc, iron, calcium and selenium as well as the vitamins A and B12 so they give you the needed nutrients without adding extra weight to your or your cat’s body.

For humans these can cause some things like cellulitis or gastroenteritis due to the bacteria inside them and many persons are also allergic to them. This is true for cats too and a raw oyster, which is generally considered a delicacy, can cause severe food poisoning and the Vibrio vulnificus infection that causes diarrhea. The dehydration that a cat can get from this is so severe that there is a risk of death!

For cats one of the biggest problems is the fact that they contain enzymes which destroy thiamine especially when eaten in large amounts. Thiamine is required for a cat’s well being and a severe lack can lead to neurological problems that can end up with seizures or even a coma. This means that even a small amount of oyster meat can be dangerous for a cat.

As the oceans of our planet become more polluted every day, the oysters filter the water and some of the bad elements will be transmitted to them. Litter, oil spills or other toxins might not affect us very badly since we have a much higher body weight but they can cause severe damage for a cat.

Cats will be attracted by the smell and taste of any sea food and oysters are no exception but pay attention to commercial food that contains this ingredient as it can be dangerous to your furry friend even if they aren’t allergic to them.

No, you should avoid serving them this as it poses too many risks for their health and there are much safer options for seafood out there, like fish or even crab.