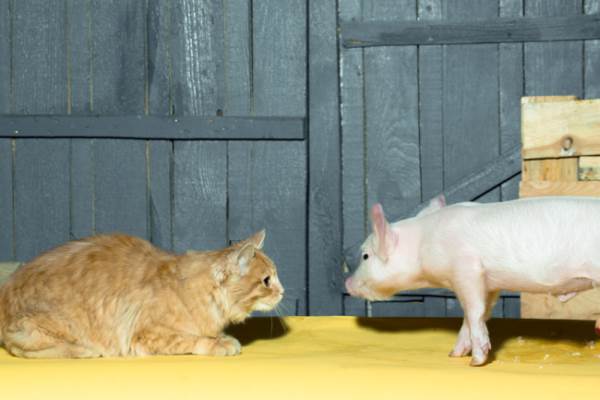 Pork meat received a lot of bad reputation throughout the years but it is still one of the most popular types of meat throughout the globe, probably only surpassed by chicken and beef. When it comes to cat food we don’t often see commercial brands using pork so the question is quite natural: can cats eat pork? And if so, is it good for them? Let us find out!

Most untreated meat is good for cats since they are obligate carnivores and their digestive system is designed specifically to assimilate meat. Since this meat contains a lot of proteins that cats really need in their diet it is a good choice to add in their menu and even if it’s high in fat, cats have the ability to digest it properly. Pay attention though that if the cat is too sedentary obesity might become problematic.

The most frequent comment about why pork is bad is the possible presence of the trichinosis parasite which can be transmitted to humans or cats through the ingestion of contaminated meat. This roundworm is a lot more dangerous to humans than it is for cats or dogs and the efforts to reduce its prevalence led to it being almost eradicated from domestic animals. The main sources of risk are wild game like boars, deer or bear. Rats or mice can also be hosts to trichinella and outdoor cats have a risk of getting this disease from them.

Some cats are allergic to pork but this is rarely the case. Obviously, if you see signs of allergy like sneezing, rashes and some gastrointestinal upset then you should try to introduce the food gradually and see if these persist.

Even if you might not see them too often, there are many brands that produce cat food with pork as the main ingredient and these are a much better option than buying cans made for human consumption since they will contain a lot less salt.

Aside from trichinosis the raw pork meat can contain other parasites that are as harmful to cats as they are to humans so it is better to cook the meat first. Also make sure to remove any bones before cooking it since they can splinter during boiling and become very sharp, leading to possible damage in the throat or stomach of your pet. There are ways of preparing raw meat for consumption but we’ll leave those for another article.

Processed pork meat like bacon or ham might contain sulfides and the high level of salt will cause heart problems, sodium poisoning and troubles with the blood pressure if given too often so keep those for yourself and give your cat food that is made specifically with them in mind if you want to have a happy and healthy companion.

Yes pork meat is safe for cats if cooked properly.