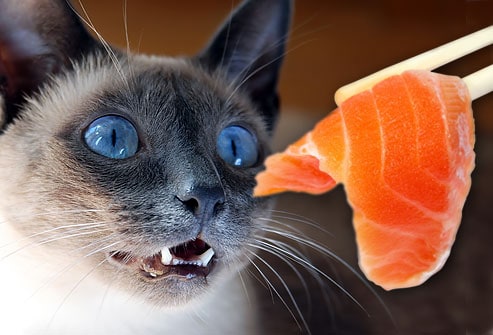 Salmon is one of the most beloved fish in the world and also one of the healthiest due to the huge amounts of Omega 3s it contains which help the brain, eye and nervous system develop. Now if it is good for us does it mean that our cat will benefit from it too? It might seem like a pointless question to ask “can cats eat salmon?” since we know they love fish but sometimes there’s more to the subject than a simple yes or no.

The Omega 3 fatty acids along with the proteins, vitamins D, B and many others make it a rich source of health for us and there are so many dishes with this wonderful fish. Cats are obligate carnivores and should eat as much meat as possible so this is a very good choice for them.

That being said, salmon won’t provide them with all the nutritional elements they need such as taurine and there are some other important problems to consider which we will cover next.

How can cats, who love fish, be allergic to them?! Well, think about cats in the wild. As anyone knows they aren’t exactly fond of water so how will they catch the fish then? The fact is that they aren’t a part of their natural diet and thus it is quite often the case that cats are allergic to fish or seafood.

The way this manifests is through vomiting, diarrhea, their skin will start to itch and they will sneeze so if you see these symptoms after giving fish to your cat then it might be a good idea to stop and see a veterinarian to determine if this is really the case. If your cat is allergic then go for commercial food that doesn’t have any fish in it.

Canned salmon is usually preserved in a lot of salt and many other additives that are harmful to cats so it is a good idea not to give your cat fish that comes in this form. Another way of preserving salmon is by smoking it and this is done by curing the fish with salt beforehand. The quantity of salt contained in smoked salmon is dangerous for cats and they can get sodium poisoning from it so don’t feed this to them either.

We mentioned that taurine from salmon isn’t sufficient and that is because it is mostly destroyed during the cooking process so is raw salmon a better option? Sadly this isn’t the case because raw fish contains bacteria that are likely to poison your cat while also causing a vitamin B1 deficiency that is a really serious problem.

That leaves the option of cooking your fish by boiling or frying it (without salt is better) and you should also make sure that there aren’t any bones left since they can harm or even lead to your cat choking.

Yes they can eat it if it’s cooked but it should never become their main diet.