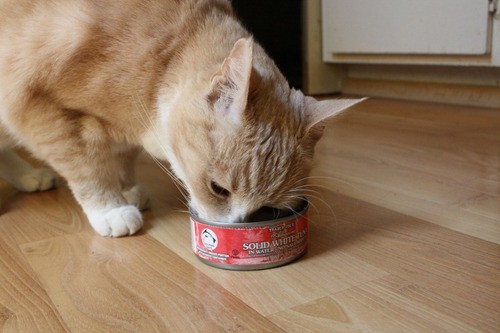 Tuna is a delicacy that is found in almost any region of the globe and is appreciated due to its great flavor and specific texture. Now the most common way you can find them is in cans but whatever the form you might ask yourself: can cats eat tuna? The answer isn’t as simple as you might guess.

The general opinion is that cats love fish and in popular media you often see cats eating tuna cans as their main meal although since they come in such a large variety there are many things to take into consideration.

The omega fatty acids and proteins from the fish are really good for your cat’s health (and for your own) so this is a strong reason for using this as their meal. They help boost their vital organs and their muscles while the potassium, manganese and vitamins B12, C and 6 will improve their immunity. Antioxidants are also helping and they get a lot of energy from the fatty acids or thiamine. Their circulation is also improved by iron, niacin, or riboflavin.

The problem is that many cans of tuna have a lot of salt or oil and those aren’t so good for your furry friend. They assimilate much less salt than us and can get poisoned by large quantities so only choose tuna that doesn’t have any added salt and is kept in water.

Tuna and fish in general is great but it should be one treat that you give your cat once in a while instead of the main thing they eat. This meat causes a deficiency in vitamin E and this will lead to what is known as the yellow fat disease (or steatitis) which will cause the inflammation of their fatty tissues, a very painful symptom. The saturated fats from the tuna are also dangerous and this fish contains a lot of mercury (like most fish) that can poison your pet.

The cans that contain tuna and are made specifically for cats try to balance the amount of fish with other things they need so that the problems mentioned above won’t show up. Since vitamin E deficiency is a risk the manufacturers add additional vitamins and minerals to compensate and thus these are a much safer alternative than simply giving your cat a share of the can that you opened for yourself.

If you have some cans of tuna lying around always check the ingredients before feeding it to your cat because these vary in quality and can be filled with preservative oils or flavorings that might do serious harm to your cat. Spicy variants, tomato flavors and those with a lot of added oil or salt should definitely be avoided because they will do more damage than good.

Yes but it should be done in moderation since they can lead to some health issues if they are made an omnipresent part of their meal.