I could give you a million reasons why we love our feline companions. But, I won’t go down that road because it could take a while. Those little wet noses and fluffy tails can win our hearts in a blink of an eye. Whether they play with boxes or lurking to steal a piece of salami, they are adorable and heart-melting. Besides being weird, funny, soft, plushy, affectionate, aloof, clever, silly, and so on, research has shown that they can be healing for humans. Unfortunately, these silly furballs can also suffer from illnesses, just as we can. Lately, many images of strange looking cats spread all over the internet. Accompanying articles often claimed that these cats suffered from Down syndrome. Cats with Down syndrome – it sounds awful, but is it true?

The short and clear answer is: no. Cats can’t have Down syndrome even though some conditions and genetic disorders may resemble some Down syndrome symptoms. If the short answer is not enough for you (it never should), I’ll show you all the facts that debunk this myth.

What Is Down Syndrome?

Down syndrome is a genetic disorder also known as trisomy 21. Most sexually reproduced organisms, including humans and cats, have pairs of chromosomes in each cell. Humans have 23 pairs of chromosomes while cats have 19. Improper cell division can lead to embryos that have an extra copy of the chromosome.

Why Do Some People Think That Cats Can Have Down Syndrome?

There are two main reasons for these misconceptions. Both of them show that humans tend to jump to conclusions pretty quickly before they know all important facts.

Actually, the correct word would be “anthropomorphizing”. Anyhow, it means that we are prone to attributing human traits and behaviors to animals. Truth be told, we all do it sometimes. Whenever you call your cat charming, mischievous, sly, clever, or deceitful, you’re doing it. Even just giving your cat a name is an anthropomorphism. Most animals don’t have a concept of self. And they most certainly don’t have a concept of names. Cats and particularly dogs seem to understand their names. But, for them it’s not a name, it’s an invitation to communicate. However, this is a topic for another, quite long and complicated story.

As for Down syndrome, cats can have peculiar and unusual physical traits that resemble Down syndrome. Usually, it is a broad nose, eyes set widely apart, or small and odd ears. It can also include unusual behavior, walking problems, and low muscle tone.

The second reason is pretty simple. Sometimes, the cat’s condition really looks like Down syndrome. However, looking like something shouldn’t be enough to identify it. 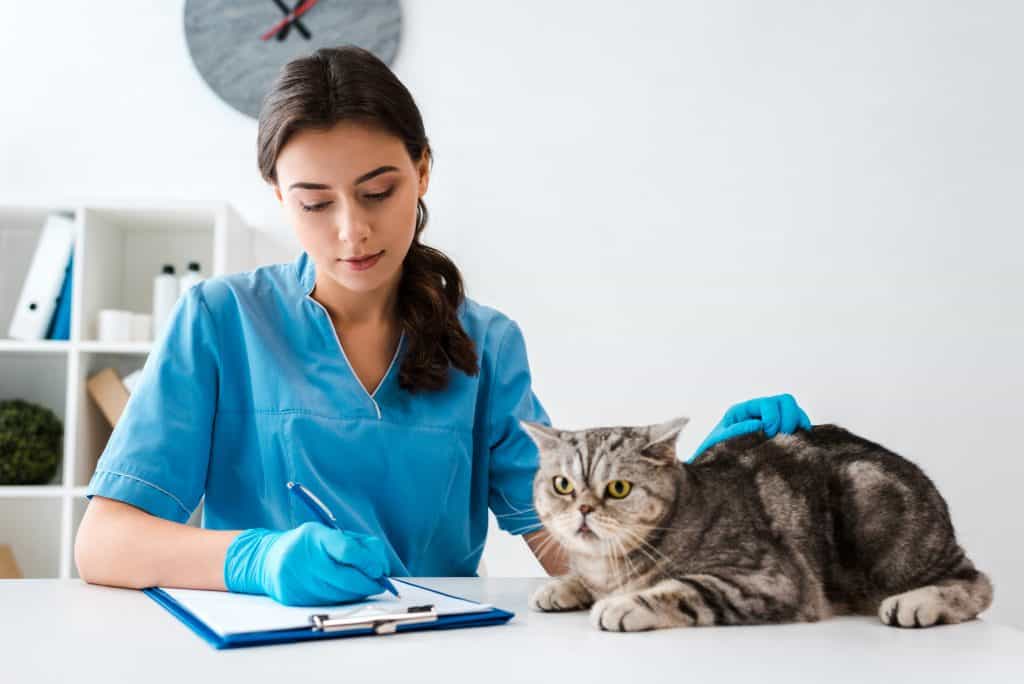 So, If It’s Not Down Syndrome, What Is It?

Down syndrome-like symptoms cover a wide variety of different symptoms. A number of conditions can show some of these symptoms. Some of them aren’t even genetic. Infections, neurological problems, exposure to toxins, may not harm a pregnant cat but can result in all kinds of kitten disorders.

So, there isn’t a universal answer to this question. Some of these weird-looking cats are perfectly healthy and show no signs of any problem other than unusual looks. If you have a suspicion, a detailed vet examination is the only way to find out if and what is wrong with your cat.

Anyway, it is not often the case, but it is possible for a cat to have special needs. That means that cat parents should take extra care of these cats. Even though cats are pretty independent creatures, their quality of life heavily depends on you. It is even more so for cats with any kind of disability. With proper care, you can help them to live a happy and fulfilled life.

There are no cats with Down syndrome. Saying that a cat has Down syndrome is not only untrue but also misleading. Each health issue requires a specific approach and treatment. So, you shouldn’t know better than diagnosing your cat on your own. Your vet is your best friend when it comes to any cat issues.

However, there are cats with special needs and severe disabilities, but there is no cat with down syndrome. Whether your cat is healthy or impaired, you should listen to your vet and learn how to be helpful. One thing is mandatory: give your cat an unconditional love. It can never hurt, and it might help.