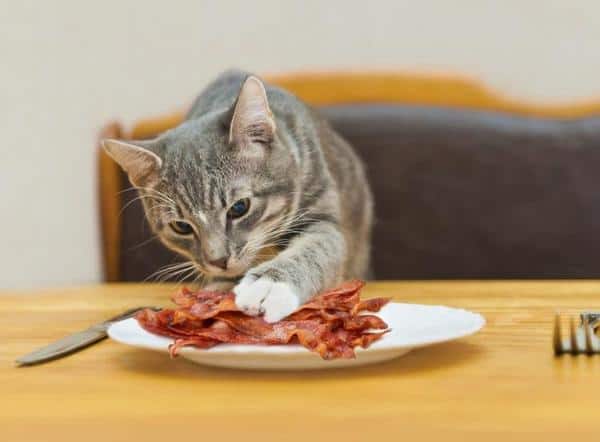 Bacon is something that has become really essential to most of the world and thus we use it in things that might seem odd at a closer glance. We even combine it with chocolate, most snack foods have a bacon-flavored version and there are also the obvious steakhouses. Cats generally love meat so you might ask yourself can cats eat bacon? Even if the answer might seem as an obvious yes, things are actually a bit more complicated than that so let us take a closer look.

Meat is what the cat’s digestive system was built to eat as through their evolution they survived on nothing but prey and thus their bodies stopped producing the chemicals needed to process plants properly.

Bacon is actually meat of course and thus it contains proteins and fat, both of which are important for a cat’s diet. The amount of proteins is about 3 grams for a slice so it’s not too much and pork meat in general doesn’t pose any additional problems.

The thing that makes bacon — and a lot of other cured meats like ham and salami — problematic is the way in which it is prepared. If bacon was made for human consumption this means that it probably contains a lot of salt as this makes it much tastier for us and at the same time helps preserve the meat better. On top of that, the frying process probably involves some sort of oils that can be harmful for your cat.

Too much fat can also increase the cat’s weight and an overweight or obese cat will have a shorter life expectancy due to the higher possibility of developing diabetes, heart disease or cancer. An overweight cat also has a decreased energy level and thus, even if you think you are making your cat happy with slices of bacon, on the long term you are shortening your pet’s life.

This kind of food is very dangerous if eaten in high quantities as your cat is much more sensitive to salt than we are. There is such as thing as sodium poisoning in cats and it is extremely serious as it can lead to permanent kidney damage or even to death in the most dire cases.

On the long term excessive salt increases the blood pressure of the cat and thus increases the risk of a heart attack or stroke. If you see your cat become lethargic, drink a lot more water than usually, have diarrhea, start to vomit or even have a seizure then you are probably witnessing a case of salt poisoning and should immediately rush to the veterinarian.

Bacon is a safe treat in small quantities but if you give your cat some every day then you will have an unhealthy cat so keep it only as an occasional snack.