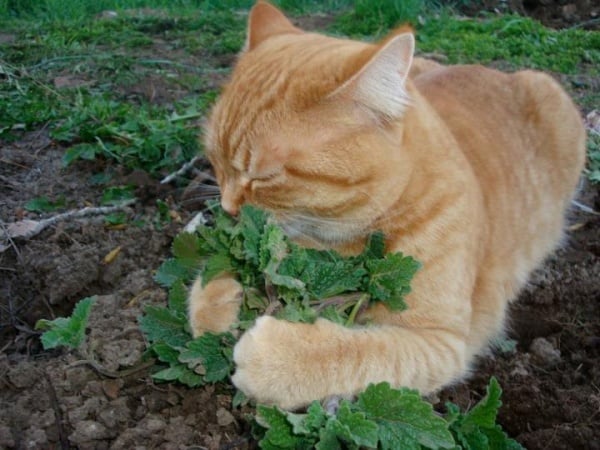 Since the word cat is in the name of this plant you might have guessed that it is connected to furry animals in some way so let us find out everything you need to know about catnip and the answer to the question can cats eat catnip?

It is also called catmint or catwort and it seems to produce a very unique effect when a cat is near it, an effect that is also visible in lions, tigers or panthers. This perennial herb is from the mint family and the substance which attracts cats so much is called nepetalactone. This is present on the stems and leaves and it is considered that the effect on felines is similar to what a human would feel when smoking marijuana or taking LSD.

The effects last around five to 15 minutes and the smell alone will produce the “high” effect so you will probably see the cat rolling around, flipping over, becoming more playful and being hyperactive. If they eat the plant though the effect is that of a sedative and it is considered generally safe although too much of it might get their stomach upset leading to vomiting or diarrhea.

It is estimated that around 50% of the cats react to this substance but in different degrees so there is a chance that your pet won’t be interested. Kittens that are younger than eight weeks and some older cats won’t react to this plant. If they are reacting though and you continue to expose your pet to the substance for a long time then they might grow tired of it and start ignoring the plant.

To prevent habituation it is recommended to give them this plant only once every couple of weeks. There is no risk of an overdose of catnip and most cats will just refuse it when they have had enough so you shouldn’t worry about this.

Since cats are so responsive to this plant it is often used for training them and if you want your cat to stay in certain places or make those areas more appealing to them then a bit of catnip put there will certainly stir their interest.

You can create some toys of your own with a bit of catnip such as a paper ball in which you put a pinch or some yarn for your cat to play with since this substance is such a strong stimulant for them and will keep the pet occupied.

It is better to get fresh or dried catnip instead of sprays since those won’t contain so much of the nepetalactone that they enjoy so much. Remember that the potency of the herb will diminish in time and the best solution to keep some around for a long time is to put some in the freezer for later use.

Yes, they often prefer to sniff it but eating it isn’t dangerous to them.