Until recently, I believed that all cats go completely crazy over catnip. But the fact is, one out of two cats won’t experience any reaction and will act their usual self.

This finding prompted me to test it out on my cat…

Simply put, my feline had a blast and immediately started to euphorically roll and drool all over the catnip-stuffed mouse I got him.

While this was hilarious to watch, it made me wonder what exactly is it about this herb that makes cats act this way?

Scientifically called Nepeta cataria, catnip is a perennial fragrant plant from the mint family. But you probably know it as catmint or catswort.

Originally from Asia, Africa, and Europe, catnip is now found all over the world and it grows as a weed through North America. It is two to three feet tall, has stems with heart-shaped leaves and small blue, pink, white, or lavender flowers. 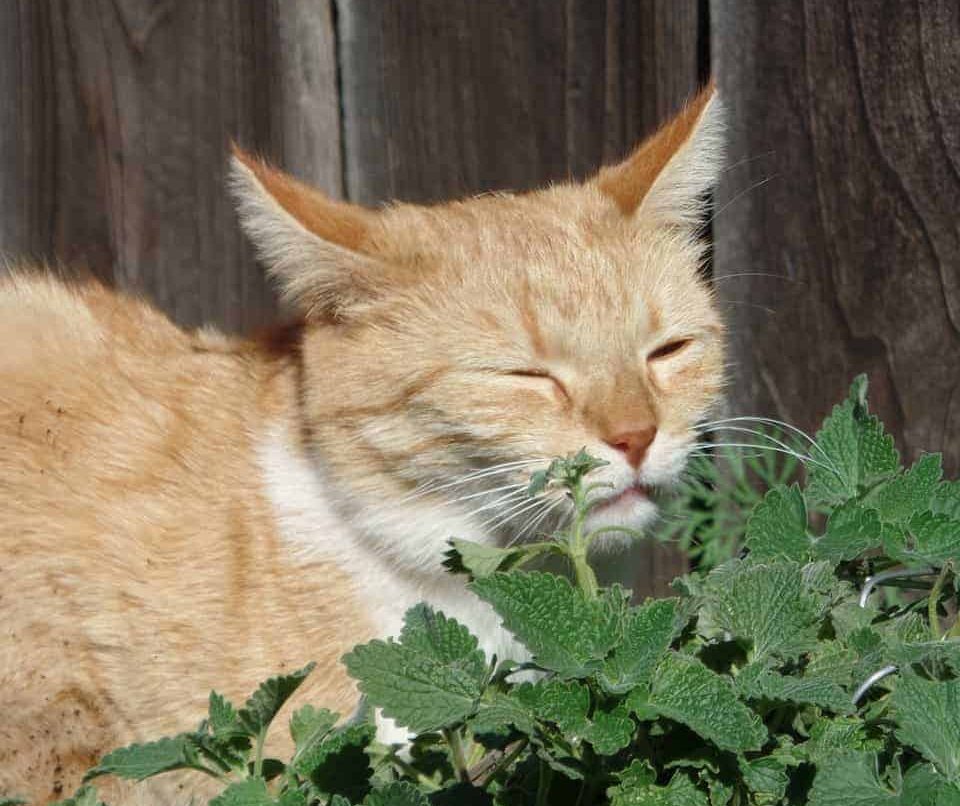 What Does Catnip Do to Cats?

Basically, it has a mood-altering effect, causing cats to act silly or to just be happy. Its appeal comes from its volatile oil, specifically one chemical compound in it – nepetalactone. This chemical is found in the seeds, stems, and leaves of the catnip plant.

When nepetalactone enters a cat’s nose, it binds to receptors, which in turn, stimulate sensory neurons leading into the brain. This appears to change the activity of several areas in a cat’s brain, resulting in a sense of overwhelming euphoria and happiness.

So, why do cats like catnip so much? Its scent stimulates brain receptors linked to “feel-good” pheromones and makes a cat extremely happy.

The effect of catnip is often described as being similar to that of LSD and marijuana on humans. But not all cats are affected in the same way.

The most common reactions to catnip are:

In general, a cat would be in a haze for five to 10 minutes. After the effect wears off, it will take about two hours for a cat to become sensitive to catnip again.

Do All Cats React to Catnip?

Despite common beliefs, not all cats go bonkers when exposed to it. Approximately 50 percent of cats aren’t affected by it. Scientists believe that the catnip response might be a hereditary trait.

Less likely to react to catnip are:

How to Use Catnip

If you never used catnip before, you may want to try it just for fun! It can be interesting to see if and how your cat is going to react to it.

However, since so much cats do react to it, it can be a powerful training aid. Here is how you can use catnip to train your kitty:

You should know that if a cat is exposed to catnip frequently, she may no longer react to it. So, it is best if you use it once every two to three weeks to ensure that it really works.

There is no specific dose you should give to your cat. If dried, just sprinkle it so your cat can roll into it, but avoid mixing it into cat food.

Is Catnip Safe for Cats?

Luckily for your cat, catnip is completely safe to eat and non-addictive. Also, you don’t have to worry about an overdose – cats will simply refuse it once they have had enough.

The only thing you should keep an eye out for is feeding too much catnip to your cat. A lot of eaten catnip can cause vomiting and diarrhea, but your cat will be back to normal in no time. To avoid cleaning messes, make sure that your stash is well hidden from your cat and her greedy paws.

Most owners like to offer catnip to their felines to help them let loose and bring out that inner kitten. However, some argue that giving their cats substances that will on purpose change their behavior is unethical.

Ultimately, the choice of giving your kitty catnip is completely up to you. But rest assured that it is non-addictive and safe, and your cat is in no danger of overdosing. If you decide to give your cat catnip, be prepared for some hilarious behavior and a lot of fun!