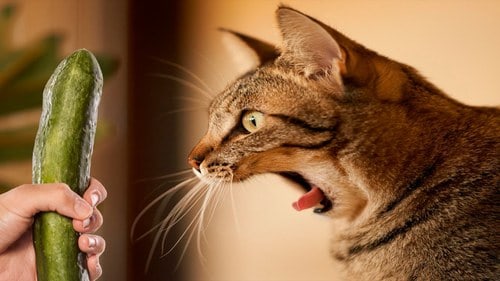 Having almost 90% water in their composition, cucumbers are also a good source of some essential nutrients for us but can cats benefit from them at all. Can cats eat cucumber or are they just a vegetable to keep your cat away from? Let us find out together!

Cucumbers are a great source of vitamin K, beta-caroten copper, potassium and manganese so a slice shouldn’t do too much harm right? Well, the fact is that there isn’t anything wrong with a bite once in a while and the water itself can act as a treat during the torrid days of summer.

Among the health benefits they offer to us we count the reduced risk of cardiovascular disease and also of several types of cancer. For cats the benefits are different, coming through their content of vitamin K which helps their improve their blood clotting factor so it is good for their liver.

Since they have a low amount of calories, these vegetables can help your pet lose some weight. The molybdenum from cucumbers helps their metabolism a lot so that is another element that makes these vegetables a good idea.

The problem most pet owners have is that once we learn that something has good properties for our cat we tend to exaggerate with the quantities. If you give your cat more than a slice or two of cucumbers or pickles, what will happen is that they will probably get diarrhea. Since they contain so much water just treat it as an occasional treat.

The skin is better off peeled because the pesticides cucumbers are sprayed with can linger on and poison your cat. This is a good precaution to have with all vegetables or other food you give to your cat. If you wouldn’t eat something then your cat probably shouldn’t either.

Many of us have seen videos (or even did this experiment with our own pet) in which cats freak out after seeing a cucumber and acting as if they were threatened by it. The explanations for this behavior vary and most specialists think it is a fear of unknown. They didn’t expect to find such a vegetable put there and their danger sense is triggered.

Cats are generally suspicious of the unknown and perhaps in their mind this can represent a snake or some other predators. Now hopefully if you understand that your cat has those reactions out of fear and self-preservation you will also realize that it is a cruel thing to subject your pet to such a treatment just to have some laughs or to put some video on your social media.

Yes, they can provide some needed nutritional elements and help with the thirst but never give them more than one or two slices.