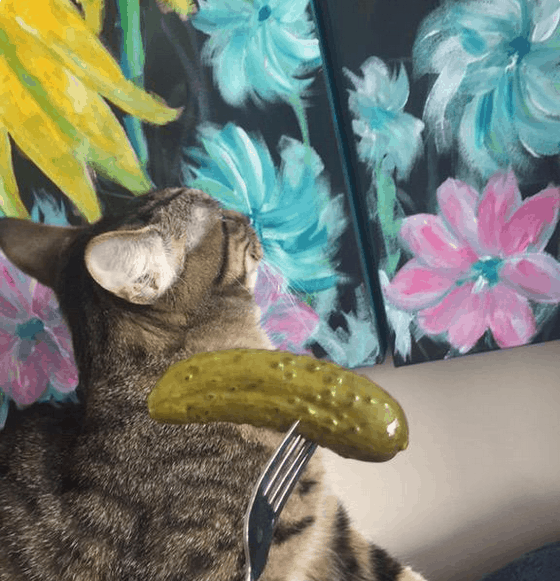 Pickles are certainly delicious either on their own, in a sandwich or in a salad and they make any vegetable more interesting but what about giving a slice to your cat as a treat? Let us find out together the answer to the question: can cats eat pickles?

The most popular vegetables for pickles are cucumbers and they provide us with some vitamin C, beta-carotene and manganese. These three elements aren’t as useful to cats as they are to us since they can produce vitamin C on their own, the beta-carotene cannot be used by them to synthesize vitamin A so their only choice for this vitamin is to take it from the flesh of other animals.

Since cats are obligate carnivores they get almost no nutritional value from pickles and the story doesn’t end here since these might actually prove quite harmful.

Cucumbers contain around 90% water so they can quell your pet’s thirst but when we pickle them we add a lot of salt. A single small pickle has around eight times more than the cat’s daily sodium tolerance and exceeding their daily intake can lead to very serious problems. We experience thirst and water retention too when eating too many pickles but cats can also have increased blood pressure and salt poisoning that is really dangerous.

Salt poisoning or hyponatremia has symptoms like vomiting, diarrhea, extreme thirst, excessive urination, loss of balance, bloating, tremors and seizures. If you let your cat in this condition for too long without proper treatment then they can get into a coma, suffer permanent damage to their kidneys and even die so if you have reasons to suspect that they are suffering from something of this sort then rush to the vet as soon as possible.

There are many recipes for pickles and some of them may contain other ingredients apart from the basic cucumber that are toxic for cats so let us have a look at some of the most common ones. Garlic is often found in the pickling juice and it can be extremely poisonous for them. Even a small quantity of garlic can make your cat fall into an anemia that could prove fatal so never have a cat around garlic.

Another common ingredient for pickles is dill and it seems that it is actually beneficial for cats since it can alleviate some of their digestive problems while also offering a good source for calcium, iron, magnesium and the vitamin B6. Sadly fishing out the dill out of a pickling jar isn’t the best choice since that still contains a lot of salt so it is better to get some fresh dill, wash it and put that into the cat’s dish instead.

Pay attention to pickled vegetables like beetroot or tomatoes since those are especially dangerous for your furry friend and as a general idea it is better to keep the salty foods for yourself since your cat is much more sensitive to them.

No, a small bite won’t hurt your cat too much but they can still do harm so it’s always a bad idea to put some in your pet’s dish.