What cat parent has not had the experience of pouring some new cat litter into their pet’s tray, only to find ourselves coughing and sputtering away as we breathe in the cloud of dust that rises from the litter as it falls into the tray?

If you are breathing in dust, you can bet that your cat is too, every time they disturb the litter to bury their business. This fine dust is also more likely to stick in their coats than larger granules of litter, so they are also likely eating a fair bit off it when they clean themselves.

Breathing in cat litter dust is bad for your health, and for the health of your cat. It sets off asthma and in large quantities, it can be a carcinogen. You might not be breathing in enough to worry about this, but your cat, with their smaller lungs, might be. Eating this dust can cause cats digestion problems and in some cases, it can even be toxic.

Unfortunately, clumping clay cat litter, which is usually the best at containing litter tray odors, is the most likely to be dusty. However, aware of the problem, some of the better cat litter brands have developed formulas that allow both for strong clumping and minimal dust. There are also a variety of more natural litters now available that contain odors almost as well as their clay counterparts.

Let’s have a closer look at the real dangers behind cat litter dust, and I will share with you my five best clumping cat litters that work hard to contain smells but with minimal dust.

OUR TOP PICK
My favorite cat litter is the World’s Best Clumping Cat Litter which might be just that. As well as being 99 percent dust-free, it is made from compressed corn, which makes it environmentally friendly and flushable. This means that I can scoop and flush regularly so that there is rarely anything sitting in the tray to cause lingering smells. However, it is quite pricey.
Check Price on ChewyCheck Price on Amazon

With all these factors in mind, these are what I consider to be the best five cat litters on the market that are also virtually dust-free. 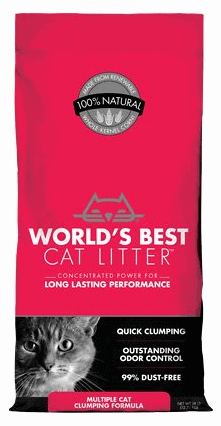 Made from a natural, compressed corn formula, this litter formula is 99 percent dust-free and also completely free of dangerous silica dust. It traps odors pretty well, though not as well as clay formulas. But this shouldn’t be a problem as mess shouldn’t stay around for long.

This stuff is safe for both the septic tank and the sewer system, which means you can regularly just scoop up waste and flush it away down the toilet. The litter forms a tight lock around moisture, so you shouldn’t be exposed to a wave of smell when scooping for disposal.

This litter is safe for you, your pet, and the planet, so you can feel pretty good about using it. But, as is often the case, being good for the environment can cost a bit more, and this is one of the most expensive cat litters on this list. 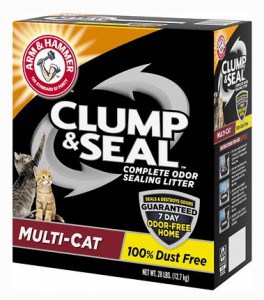 If you are looking for something cheaper, Arm and Hammer litter is half the price, and while it is made from clay, it has virtually no dust. It also does a great job of containing odors, so much so that you only need to completely change the litter once a week.

This clumping clay cat litter claims to be 100 percent dust-free, and it is as good as completely free from dust. It dissipates odor on contact with its own special baking soda formula, and the litter forms tight clumps around waste thanks to proprietary moisture-activated micro-granules. This makes it easy to scoop regularly and you should only have to completely change your cat’s litter once a week as it promises to stay pretty fresh for at least seven days.

This product is so good that it makes it to the top five in a lot of cat litter roundups, especially that on odor control and clumping. 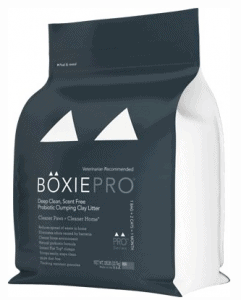 If you are happy to spend a bit more and are looking for something a bit special, consider BoxiePro. It uses probiotics to kill odors and bacteria, making for a healthier household without the need for unnecessary anti-bacterial products.

This is another clay cat litter that manages to be virtually dust-free. What makes this stuff special is that it utilizes natural probiotics to kill litter box bacteria, dissipating odors and minimizing the chances of bacteria-borne illnesses taking over the household, without using unnecessary antibacterial substances.

Also unique about this litter, it forces waste to clump at the top of the tray rather than sink to the bottom, which makes it easier to scoop but does mean that you should scoop regularly for your cat’s comfort.

This litter is so good that naturally, it costs more. It costs about twice as much as the Arm and Hammer litter, which is why it is a little lower down the list. 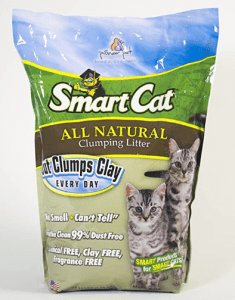 This is another natural cat litter, this time made from super-absorbent grass, and which is surprisingly affordable for a natural brand, so about mid-range for cat litters in general. It forms tight clumps around liquids and solids to kill odors almost as well as a clay litter and it is easy to scoop.

It also has almost no dust, which means cats won’t be inhaling anything, even though what they would be inhaling would be less dangerous for them than other types of dust.

The granules of this litter are very fine and it kind of has the texture of smooth sand, which means that it appeals to even the pickiest cats.

This litter is also highly environmentally friendly, so it will feel good on both your conscious and your wallet. 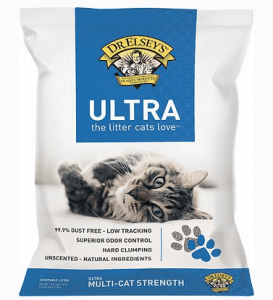 This clumping clay formula combines heavy non-tracking granules with medium-grain clay which is less likely to stick in your cat’s fur than finer grains, and also means less dust, claiming to be 99.9% dust-free.

It forms very tight clumps around waste, which means that it can contain odor without a lot of chemicals and that the clumps are easy to scoop. This also makes this litter great for sifting or mechanical litter boxes, which can become smelly if clumps break up.

The Dangers Of Dust

The dust associated with many cat litters is not just irritating to clean up, it can also cause serious health problems when inhaled by humans and when inhaled or eaten by cats. The dust found in clumping cat litter, which many of us prefer as it is better at containing odors, is particularly bad as it contains a variety of chemicals that help the litter clump but are dangerous.

The kind of dust produced by clumping clay cat litter is particularly dangerous, as it usually contains crystalline silica which is known to cause respiratory problems and to be a human lung carcinogen. People who work with the substance commercially know the precautions that need to be taken.

While we aren’t breathing in huge amounts, even if we change our cat’s litter twice a week, it can still cause problems and exacerbate other existing lung problems, especially asthma. And while we might not be breathing in that much, our cat is probably breathing in quite a bit, kicking it up several times a day and staying with it in a small contained space. Plus, their lungs are a lot smaller, so it takes a lot less to start causing problems.

The dust from cat litter is also likely to stick to a cat’s fur and paws, leading them to track it around the house (annoying), and ingest it when cleaning themselves (gross and dangerous).

Clumping clay also often contains sodium bentonite, which of course is also found in its dust. Sodium bentonite clay expands to up to 18 times its original volume when it comes into contact with water. This means that a small amount of it can quickly become a hard, cement-like mass in your cat’s intestines, seriously interfering with their health.

This is especially dangerous for kittens, who have a smaller intestinal tract, and therefore are less likely to be able to deal with this problem. So go for safe and natural when choosing litter for these babies. Learn more about kitten-safe litter here. 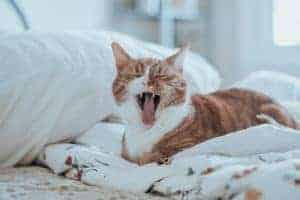 Choosing A Dust-Free Or Low-Dust Litter

You might think no problem, I’ll just pick a cat litter that does not use clumping clay. But, of course, it is not that simple. Clumping clay is the most popular type of cat litter for a reason. It is the most effective cat litter for containing odors and locking in moisture, making it easy to keep your cat’s tray clean.

Moreover, other types of litter have their own dangers. For example, silica gel crystal cat litter is also very effective at containing odors, but it is made from completely synthetic materials, which can be toxic to cats when ingested. But here’s one silica based product called Pretty Litter that we may just recommend due to its color changing abilities that indicate your cat’s general health.

Litters made from natural materials, such as corn or recycled paper, are a better option, but they are generally less effective than clumping clay litter and significantly more expensive. However, they really are worth the investment when it comes to cats with allergies. Still, look out for when they use the same chemicals as clay litter to allow for clumping.

Of the cat litters in this list, my favorite and the one I use at home is the World’s Best Clumping Cat Litter. It is 99 percent dust-free, so it keeps my home clean, and I don’t worry about my cat inhaling or eating it. It is also flushable, so while it does not contain odors as well as a clay litter, I can scoop regularly and flush away.

If you are looking for a more affordable litter or something that contains smells better as you can’t scoop regularly, then Arm and Hammer litter is a great choice. It is half the price, and while made from clay is virtually dust-free. It uses a unique baking soda formula to kill odors, and forms tight clumps that trap moisture in a small area, keeping most of the litter clean.

Finally, I think it is worth mentioning BoxiePro litter, just because it is so innovative. It is a clay litter with almost no dust and it uses unique probiotics to kill smells and bacteria. This means a cleaner home without the need for excessive antibacterial substances. I think that this is definitely the brand to watch in terms of next generation cat litters.

Find out more about how their innovative formula works in this video: